Please Disagree With Me I am familiar with unhealthy fighting through my 20 years as a family and couples therapist. This week, tempers rose and most of us watched in disbelief as the Capitol building was breached. Political violence is often a result of disagreements not resolved. Worse, it is a result of a lack of a healthy dialogue. On social media, people try to force their will onto others. The result is a fight, or a removal of a “friendship.” People offend each other or cut off contact. People do not grow in any way when they fall into this dynamic.

Yet, there is a better way of relating with those we disagree. A way to grow through mutual exploration of an issue. This sounds naive until you read Thomas Sowell’s essay “I beg to disagree”. Do you know this brilliant man? In case you are not familiar, Thomas is a 90 year old writer, economist, and all around smart guy. He shares that disagreements can lead to a stimulating conversation and personal growth. He also shared that he met his wife due to a disagreement. Apparently, she disagreed with one of the points in his books. They met to discuss their views. They got married but have never resolved their original disagreement. I love this. Both honored their personal beliefs and were able to get married. They stayed married for 20 years while holding different beliefs about an issue. That is flexibility, tolerance and love.

So, this is the first of two blog posts I will write to help us learn to disagree with others. I include myself because we humans are not always the best at seeing others’ points of view. In our humanness, it is common, even natural, to want everyone to agree with us. This is not realistic. The beauty of living is that we are not all alike. In this post, we will explore what an unhealthy disagreement looks like. In my second blog post we will explore how to disagree and grow.

Paul Graham (2008 essay) explains that people use different techniques when they disagree. He created the below graph explaining types of ways of disagreeing. 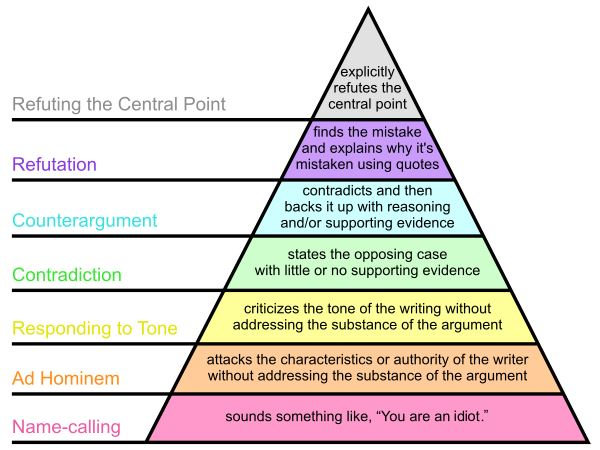 Some families, individuals, and couples use name calling during arguments. Name calling is ineffective because it attacks the person and does not allow for change. It offends and closes the door to listening and understanding. It humiliates and shames. It stops healthy conversation (people will withdraw or attack back). It is also the laziest form of disagreement. It says to the other person that because they are stupid, ignorant, vile, etc. that they are not worth engaging in a conversation. Of course, there are times to not engage in conversations but calling names is not a mature or healthy way to avoid a conversation.

Next Graham has the “ad hominem” and the “responding to tone”. I think it is better if these two are merged together as a new category called Fallacies. Under Fallacies we should also add “thought policing” and “whataboutism/tu quoque” fallacies. Ad Hominem is when we attack a person’s character, motivation, authority, or source. This, at rare times, can be appropriate. Often though, it is usually used to deflect from the original point. Thought policing is when we state an argument should not be made. The argument is somehow offensive or wrong according to one’s personal beliefs. Tone policing is when we dismiss an argument simply because of the tone. Whataboutism is when one person accuses another of doing a similar “wrong” thing. For instance, partner 1: “you did not wash the dishes like you said you would”. Partner 2: “well, two weeks ago you said that you would do the laundry and you did not”. This is an ineffective way of communicating since the fight is no longer about the original issue. All of these fallacies lead away from the original argument. As a result, the point of the argument is never discussed and possible agreements are not reached.

Contradiction is an argument based on emotion. It does not add to the argument or conversation. For instance, “I feel the sky is black so my argument is that it must be black”. This does not address the other person’s point of view. This lack of consideration prevents growth for both parties.

Now you know some of the ways we engage in unhealthy conversations. Next time, I will discuss the top three parts of the pyramid. These three sections: counter argument, refutation, and refuting the central point are a part of how to have effective arguments. Until then, remember this Timothy Keller quote, “Tolerance isn’t about not having beliefs. It’s about how your beliefs lead you to treat people who disagree with you.”

Sabrina Bowen, MS, LCMFT, provides couple, family, and individual therapy in our downtown Bethesda office and virtually to those located in the state of Maryland. Call or email today to set up your first appointment or a complimentary consultation with Sabrina!